Walking to the Barbican Centre – one of the main EFG London Jazz Festival venues – I keep a keen eye out for signs of festival. 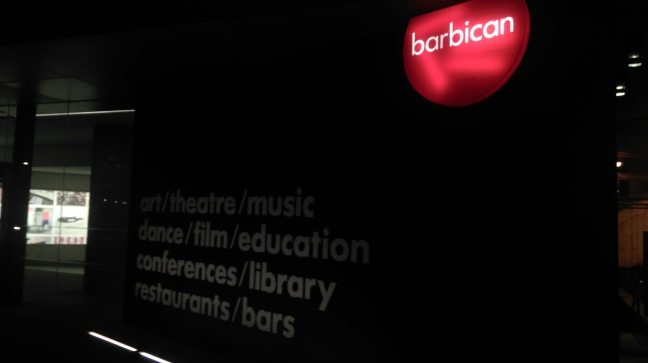 Outside the venue, a stone’s throw from the theatre stage door, is a grey BBC outside broadcast van. Whilst perhaps not an obvious sign of festival, it nevertheless indicates that something out of the ordinary is happening inside (the Jazz Voices concert later on will be broadcast live on Radio 3). 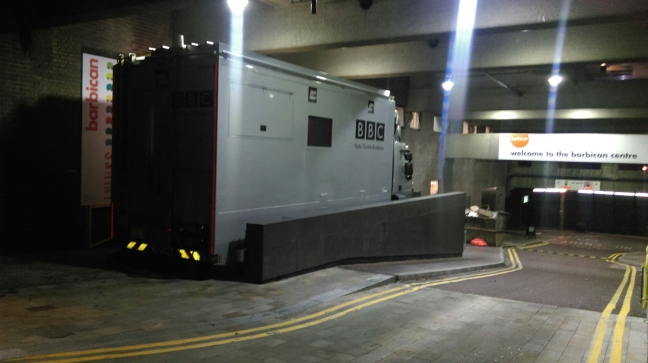 Walking into the venue there are no obvious signs of festival that I can see, other than at the Box Office, which is advertising tickets for tonight’s event: Jazz Voices.

On the wall opposite is a board showing the Barbican’s partners. On it is the name of the Festival’s producer – Serious – again, not an obvious sign of festival, unless perhaps one is looking for it.

Before getting to the foyer, the pathway is partially blocked by a large sculpture – the sign says it’s for the SPILL Festival of Performance. London and its Barbican Centre are obviously big enough to host multiple festivals at the same time. 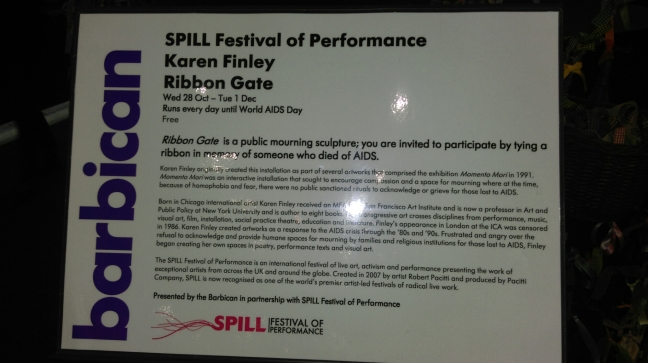 The first real indicator of the EFG London Jazz Festival comes from another sign, directing guests to the Jazz Voices reception.

However, upon entering the Foyer, suddenly the Festival appears, in the form of a stage a glowing Festival logo on a long white banner against a black backdrop and another LJF banner at stage right, next to a baby grand piano. To stage left is another banner proclaiming BBC Music Jazz, the pop up station, and mixing desks at side of and in front of the stage. 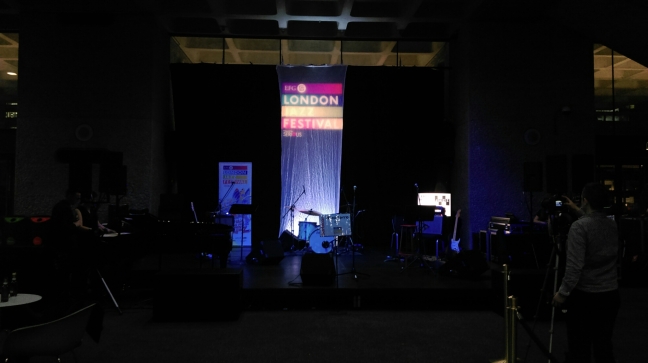 At 17.15, the Festival announces itself aurally as a brief drum sound check begins. I should add that the Foyer is far from empty – most of the seats are taken and I estimate about 60 or 70 people are in the room, including what appears to be a parent and baby group. The rest of the band join the sound check including who I imagine to be Nina Ferro, the lead singer. The bass player sings “please can I have more in my monitor” into the mic, as humorous way of communicating with the sound engineer and a tacit acknowledgement, perhaps, that, while the sound check is usually a private affair, this one is very obviously public and hence the musicians still need to entertain.

A few minutes later, the band perform a song from start to finish. The audience applaud at the end but the band do not really acknowledge them at the point. Nina Ferro does, however, thank the audience for their applause for the second song – she also adds that this is just a warm up. After four songs, Ferro thanks the audience and reminds them that they will be back at 6pm so “don’t go anywhere!”

Doing the sound check in public is something I’ve observed at many festival’s. Often the stages cannot be closed off in the same way as a concert hall, say, and there is rarely enough time to sound check each band before the stage’s programme starts for the day, coupled with the fact that bands cannot necessarily all be on site before the stage opens. It’s always interesting to watch the difference between the band in sound check mode and performance mode – there is less overt communication with the audience and much more between the musicians and sound engineers, the last something usually disguised during the show itself.

At 6pm, Serious’ communications manager takes to the mic, welcomes the audience to the Festival and so we begin!

Saturday: the Festival hits you as soon as you get through the main doors through the medium of music – the free stage appears to be almost continuously in use, whether for gigs or sound checks, and the Barbican is filled with the sound of jazz.