The EFG London Jazz Festival is often described as an ‘umbrella’ for events taking place within it. Events take place at venues such as Ronnie Scott’s which operate all year round, with the addition of special events with ‘big name’ artists promoted by Serious, the Festival’s producer, and other special gigs. However, I suggest that rather than an umbrella – a device for sheltering and protecting – the Festival is instead an amplifier of cultural activity. As an amplifier, the Festival increases and intensifies existing activity and in doing so, attracts other media and hence – in the case of radio – literally amplifies the music beyond usual levels of activity. In the case of the London Jazz Festival, this is through media partnerships with BBC Music and Jazz FM, but jazz is also getting more coverage than usual in broadsheets and other media as a result.

Visually, the analogy also works more favourably – rather than the inverted cup of an umbrella which covers what is underneath, instead the rotated cup of an amplifier* suggests both an increase and an openness to the world:- 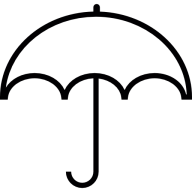 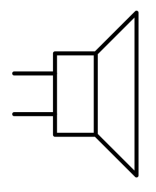 * Technically this is the electrical symbol for a speaker rather than an amplifier but hopefully a little artistic licence will be allowed.